Makota Valdina Pinto
Makota Valdina Pinto is a ritual elder in her terreiro (temple) and in the wider Candomblé community.  A retired schoolteacher,  she is a passionate voice on socio-environmental issues and a respected counsel to the City of Salvador.  Makota Valdina possesses a wealth of knowledge about sacred and medicinal plants which she works to pass on to youth.  Makota Valdina is one of the primary organizers of an annual demonstration for peace and against religious intolerance. 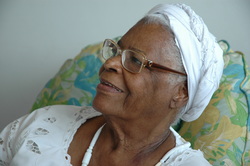 Mãe Stella de Oxóssi
Mãe Stella de Oxóssi transitioned to the ancestral realm in December 2018.  She was probably the most well known Candomblé leader in Brazil.  Her terreiro, known as Ilê Axé Opô Afonjá, functions as a village, with a museum, weaving center and a municipal school for the community's children.  It is officially recognized as part of Brazil's cultural heritage. Axé, as the terreiro is known, prioritizes ecological sustainability. Among several notable publications, including writing a weekly newspaper column disseminating the values and wisdom of Candomblé, Mãe Stella authored a children’s book, Terra Viva (Earth Alive) linking the legends of Candomblé's Orixás (deities) with urgent environmental concerns.  She was the first woman Candomblé leader inducted into Bahia's esteemed Academy of Literature.

Mãe Filhinha
Mãe Filhinha transitioned from this earthly life at the age of 110, after decades of leading her temple, the Casa de Iemanjá terreiro in the historic town of Cachoeira in the fertile region of the Recôncavo Bahiano.  A tremendous source of pride for her community, up until early 2014, Mãe Filhinha was at the helm of her terreiro's sacred rituals.  This amazing matriarch participated in annual ceremonies and festivities of the Irmandade da Boa Morte (Sisterhood of the Good Death), a society formed before abolition to buy the freedom of female slaves, of which she is the eldest member. Mãe Filhinha's father was enslaved.